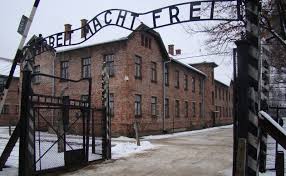 Today, while being snowed in, I found out that today is Holocaust Remembrance Day in the United Kingdom. The reason for this is that on this day in 1945, Auschwitz was liberated by the Red Army. I openly believe that the Holocaust did happen. However, today many have yet to believe and refuse to spread the truth.

I first learned about the Holocaust when I was ten years old. That Christmas I had received a book about what it was like to live in 1944. The reason for this is because I had the Molly American Girl doll and the book had pictures from the past. In the book there was a section dedicated to the Holocaust in Europe. The first thing I noticed in this section is that there were children, like me, being held captive behind barbed wire. I thought they had done something bad, until I had read the caption and discovered that they were being held there because they were Jewish. I had known a Jewish girl in my school and my uncle had married a Jewish woman. I did not understand why they were kept behind the gate because they were Jewish. I went to my dad and asked him why they were there. He explained to me that a bad man named Adolf Hitler did not like Jewish people. He went on to tell me that people died in Auschwitz because of starvation and extermination tactics, like gas chambers. I asked him if there were any children and babies killed in the Holocaust. His response was yes. I was completely horrified by what had happened behind the gates. I could not understand why someone would want to kill a baby or a child like myself at the time. When I first learned about the Holocaust, my dad told me about what had happened. However, I did not know how grim they were going to become

Flash forward to when I was twelve in sixth grade. It was here that the school was required to read the book Number the Stars by Lois Lowry. I had already known about the Holocaust at the time. But what I did not know is that it caused neighbor to turn on neighbor. The book Number the Stars is about a young girl, Annemarie, growing up in Denmark right after the Nazis had invaded. One day she comes home from school and her best friend, Ellen, who is Jewish, explains that they were informed in their synagogue that they were to report to a train station (I think). By this time, the Jewish people were forced to wear the yellow Star of David on on their clothing so that they can be recognized in public. Annemarie’s parents understood that this was not something good and arranged for Ellen and her family a safe passage out of Denmark. In the end the girl’s best friend does make it out. I learned through this book that the Danish people had taken a bit of a stand against the Nazis when some of the people wore a gold star of David even though they were not Jewish. However, it is here that I learned that unlike the young girl’s best friend, many Jewish people were not that lucky. I learned that many people, even those, who were friends with Jewish people, with the power of propaganda became brainwashed and anti-Semitic. I could not understand why people would do this. I learned from there that in the schools many children were forced to read books that were anti-Semitic. Anti-Semitism was already in Europe, the only difference is that Hitler and his officials took it to a higher level.

Going in the future two years later I was in the eighth grade. I was informed that the class was going to read a book called Night by Elie Wiesel. The exposure of what had happened in the Holocaust was about to become real. When the rest of the class had received the book, we were told to look on the back. There was drawing on the back of three people hanging. Many of my classmates, including myself, were shocked that there was drawing like this on the back. By this time the class and myself had already known about the horrors of the Holocaust, but we were about to learn the real horror that happened inside Auschwitz and other concentration camps. The book Night starts off Elie Wiesel explaining that he had a happy and normal childhood in Romania. He explained that he was studying the Torah and had a good family. Then one day it all changed when a group of people were told that they had to go some place with the Nazis. When one the men came back he explained about what had happened. Many of the people in the village did not believe what had happened because the Nazis, ironically, were being nice to them. This older man explained that he had seen babies being used as target practice and children were being beaten daily. Still no one believed him. At this point, Wiesel and his family were put into a ghetto. His father had become a community leader inside the ghetto. One night his father had come back and explained that they were being sent away. When they go to the train station they see that they are to travel by cattle car on the way there. On the train ride there was a young mother who was traveling with her son who had to be knocked out from time to time because she would see things that were not there. The things she had been seeing were the things that were going to happen. When they get to Auschwitz, Elie Wiesel recounts the last time he sees his mother and younger sister due to the fact that they were separated by gender. From here Elie goes with his father and inside they see many children and babies being burned to death. He was horrified by what he had seen. The book goes on to explain that Elie and his father were subject to malnutrition, death runs, and hypothermia. Eventually, Elie’s father does die.

When the class was done with this book, I learned that the Holocaust was something demonic and inhumane that had happened. I vowed to share the truth about what had happened with the next generation. The people who had survived the Holocaust are going to pass on one day, but their stories will not go away. I have chosen today not to write about the men who had caused this because today is about the victims.