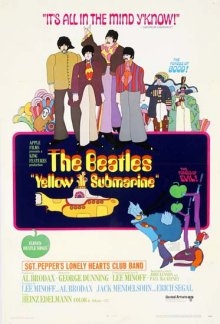 The Beatles are one of the most influential bands of all time. Their songs have been used in musicals, movies, and television shows ever since they premiered in the 1960’s. Starting out in Britain, The Beatles had a huge impact on America when they came over on February 7, 1964 to perform on the Ed Sullivan show. All of this became known as the British Invasion because many fans were anxious to see them. The Beatles did not only make an impact in music, but in film as well with Yellow Submarine. The famous movie musical inspired by their music about a happy land under attack became a smash hit.

We are introduced to Pepperland, a place where everyone is happy and content. That is until the Blue Meanies attack this underwater paradise. Due to their hatred of music, the Blue Meanies manage to take out Sgt. Peppers Lonely Hearts Club band, that had been protecting the peace underwater. Right before the mayor is capture, he sends off his aging friend Old Fred to Liverpool to find musical talent to save his hometown. Hoping that this will happen, Old Fred takes off in the yellow submarine only to go to Liverpool where he finds The Beatles. Through song, they manage to make it back to Pepperland after facing obstacles put in front of them by the Blue Meanies. With their power of song they are able to help Pepperland come back to where it was before they were attacked.

Yellow Submarine came out in the year 1968 to delight audiences. The legacy of this movie has been shown to be parodied on many shows, movies and music all because of The Beatles. All of the music and characters have a connection to the famous group of four who became wildly popular in the 1960’s with their music. The Beatles are still remembered today through many people whom they have inspired.