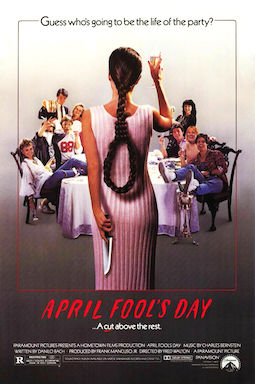 April 1st is a day that is commonly associated with pranks being played. However, in the 1986 horror film April Fool’s Day the prank is on them. When a group of friends go to visit a friend for her birthday they start disappearing one by one due to a killer on the loose.

For Spring break, Muffy St. John has invited a group of her friends from college to spend time at her secluded mansion. While prepping for her friends, Muffy lets her mother know that everything will be fine. Once her mother leaves, Muffy has a flashback with a jack-in-the-box prank that was played on her on her birthday. After setting up a series of practical jokes for: Harvey, Nikki, Rob, Kit, Skip, Nan, and Arch things start to get underway. Unfortunately, all of the party plans for Muffy’s birthday later that week go awry. When each one of her friends meets a faceless foe. When the bodies are discovered the rest of the group tries to leave the island only for Rob and Kit to be the last ones standing to face off a killer. But, who is the one who is this mysterious killer running around? Or is it all just a prank in the end?

April Fool’s Day came out in 1986 as another classic slasher film. There is nothing too new that was used in this movie with the exception of a twist ending. April Fool’s Day is another one of those films that has the thrills that get you on the first time with an fun holiday gone wrong.