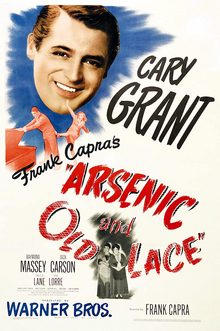 Priscilla Lane is one of those actresses who you never hear about. Yet, she was in many films where people have been able to recognize her. In Arsenic and Old Lace she portrays the unwitting newlywed wife of Mortimer Brewster. In this classic comedy we are introduced to a young man who learns that his two senile aunts are killing lonely men as part of a charity. Things get hectic as a long lost brother shows up.

Mortimer Brewster and Elaine Harper are recently married. Mortimer is known for being critical of marriage, so he tries to keep it under wraps until both families known. The film then cuts to Mortimer’s aunts Abby and Martha. They are two well beloved ladies in the community who are known for donating to many charities. After talking to Elaine’s father and giving old toys to the policeman for children. When a happy-go-lucky Mortimer returns home he unwittingly discovers a dead body. When the aunts try to explain to Mortimer why they are doing what they are doing he tries to get them committed as quickly as possible, while covering up the crime. However, he has Elaine waiting to go on their honeymoon to Niagara Falls with a cab to go. Then there is his cousin Teddy who believes that he is in fact Theodore Roosevelt. His cousin has been helping the aunts bury the body in the basement being told they are victims of malaria and believing the basement to be the Panama Canal. Things start to get worse with the arrival of Mortimer’s long lost brother Jonathan. When Jonathan arrives with his cohort Dr. Herman Einstein we learn that he is a serial killer who is one the run again. Jonathan discovers the bodies and brings one of his own in the house with him. The aunts get annoyed with Jonathan having another body in the house when the police show up. Now everything starts to come out of the bag with Elaine making the gruesome discovery in the basement. After learning about all of the bodies in the basement: Abby, Martha, and Teddy are taken to an asylum. In the meantime, Jonathan is arrested and Dr. Einstein is let go. With the mess being cleared up in an unusual way, Mortimer and Elaine are finally able to go on their honeymoon.

Arsenic and Old Lace is a 1944 movie that is based on the classic black comedy play. Even though the plot is very dark, Arsenic and Old Lace is rather humorous. Priscilla Lane starred as Elaine, the young and impatient wife who stumbles upon her husbands family secret. On April 4, 1995 Priscilla Lane passed away leaving behind a slew of films that she had starred in.