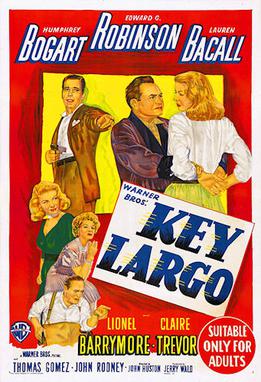 Yet, another unsung hero of the Golden era of Hollywood passed away on April 8, 2000. Claire Trevor had portrayed many characters in different films. She won her only Academy Award for Best Supporting Actress in Key Largo. In this 1948 noir classic about a former Major in the Army visiting people in the Florida city.

When ex-Major Frank McCloud goes to visit a family of a fellow army man who had passed away things go awry quickly. Soon after he visits he finds himself trapped at the hotel he checked into due to a hurricane that has hit. The hotel only has six guests who have stayed behind. They are told that a boat is on the way to get them out before things get too bad. However, when the local sheriff come to pay them a visit things go more awry. The sheriff informs the patrons of the hotel that a couple of men have escaped his custody and he is looking for them. Soon after the sheriff leaves, the escaped convicts show up at the hotel seeking shelter. Five of the men who are staying in the hotel decide to take him hostage until the police come back. But, not everything goes as planned when some of the guests start to turn on each other. After some fights that go on, Frank finds himself to be invited to stay at the hotel with the manager, who’s daughter Frank has fallen for. Yet, Frank decides to move on with his life and leave. The film ends with everyone leaving the hotel safely and Frank making the decision to return to live in Key Largo.

Key Largo is one of the those classics that you cannot get enough of. Claire Trevor won an Academy Award for her role as a beautiful, yet somewhat deceiving, hotel guest. On April 8, 2000 she passed away with a great amount of work in films she graced.