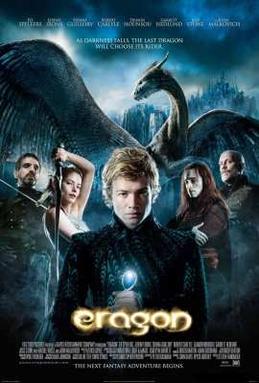 Stone is a well known singer of today. Yet, she is a well known actress as well. In the 2006 movie Eragon she had a supporting role as a fortune teller named Angela. In this magical adventure about a boy who finds a friend in a dragon, there is nothing stopping him on his way.

In a distant forest land a young farm boy named Eragon comes across a stone. He does not know the meaning behind this mystical stone that he finds. Yet, he does learn about the stone quickly when her runs into a dragon trainer who introduces him to Saphira. Eragon realizes that he has a telepathic connection with Saphira and the two bond. With Eragon the two set out on an adventure that brings them into a war. With black magic that gets in the way many of the people who go with them end up passing away. After a devastating loss, Eragon and Saphira meet Angela, a fortune teller. She informs them that a woman is calling Eragon’s name to bring justice to the land. After another loss, Eragon makes a vow that he will make sure the Dark King is defeated once and for all. But, will he succeed with out losing his or Saphira’s life.

Eragon was not well received by critics. However, I for one enjoyed this movie. With Joss Stone in a supporting, yet small role, we are surrounded by a story with adventure around every corner. On April 11, 1987, Joss Stone was born, bringing in a new wave of inspiration.