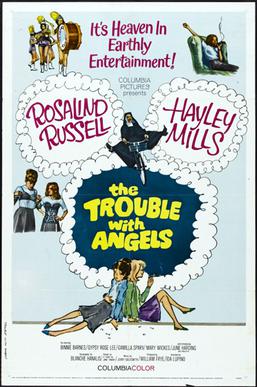 Growing up Hayley Mills was one of my favorite actresses. Although, most of the movies I watched of her were made before my time, I still enjoyed them. I couldn’t get enough of watching her on my television screen. One of my favorite movies with her in it has to be The Trouble with Angels. A story about a trouble maker wreaking havoc at an all girls Catholic school.

Mary Clancy is an average teenager who is known for playing practical jokes. When she is on her way to St. Francis, an all girls Catholic boarding school, she makes the acquaintance of Rachel Devry. Upon arrival at St. Francis Mary starts playing practical pranks with Rachel like putting bubble bath in the sugar bowl and giving tours of the nuns home. The principal at the school, Mother Superior does not care for Mary and Rachel at the beginning. That is until one time Mary and Rachel accidentally set off the fire alarm at school by smoking cigars in the basement. Mother Superior meets Mary’s uncle, who has guardianship of her, and is put off by his actions towards his daughter. She realizes that Rachel is just a follower who does everything that Mary tells her to do. Therefore, Mother Superior does not expel Rachel and Mary, rather she gives them detention. As the movie goes on Mary and Rachel start to mature a bit with Mary thinking about her own future. Once a beloved nun tragically passes away in her sleep Mary makes the decision to become a nun herself. The announcement is made at the girls graduation much to Rachel’s shock and anger. When Rachel goes to leave St. Francis once and for all, she refuses to talk to Mary. Mother Superior seeing the sadness Rachel is causing Mary, goes over and talks to Rachel about Mary’s decision. She tells Rachel that Mary did not yield, but chose to become a nun. She reminds Rachel that Mary will bring joy and laughter to the halls of St. Francis with her attitude. Rachel forgives Mary and the two say good-bye to each other as Rachel embarks on the next part of her life.