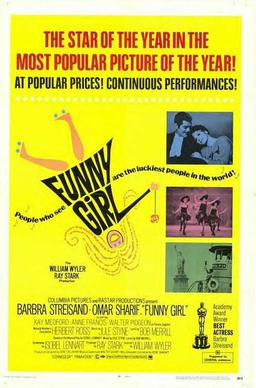 Barbra Streisand is quite the actress, singer, and dancer. She has inspired many people through her work in film, theater, and song. On April 24, 1942 this legend was born. Barbra Streisand is probably best known for her portrayal as Fanny Brice in the 1968 film Funny Girl.

The movie opens up with Fanny Brice awaiting her husband’s arrival in New York City. The film then flashes back to when they first met. We are introduced to Fanny as a stage struck teenager. When she gets her first job she meets Nicky Arnstein who will go onto follow her career. As Fanny’s career flourishes Nicky becomes romantically involved with her. Even though there are times when their meetings are just fleeting moments, Fanny really does develop feelings for Nicky. As the young star of Ziegfield Follies, Fanny is reluctant to leave the place that she has called home. But, Nicky does convince her to leave so she can be with him. Later on in the film, Nicky wins a game of while traveling on the RMS Berengia. This leads to Fanny and Nicky marrying. As the film goes on we watch as Fanny and Nicky build a life together by buying a house and having a daughter. Fanny returns to Ziegfield Follies once things settle down. Sadly, Nicky has made a few bad investments leading to them becoming broke. Having to sell their house, they move into an apartment. Only, things get worse as Nicky has been embezzling money as part of his business ventures. Nicky is sent away to prison leading up to the opening scene with Fanny awaiting Nicky’s return. Nicky had been in prison from the beginning leading Fanny to question a few things about her life with him. The movie closes with Fanny asking him to separate from her. He agrees as the credits role.

Funny Girl is a 1968 musical with songs that almost everyone one knows. From “Don’t Rain on My Parade” to “Funny Girl” we are brought into this timeless classic over and over again. Barbra Streisand originate the role of Fanny Brice on Broadway in 1964. She then brought her to life on film in 1968 for audiences near and far to admire her. On April 24, 1942 Barbra Streisand was born, she is stil well beloved today as she was back then.