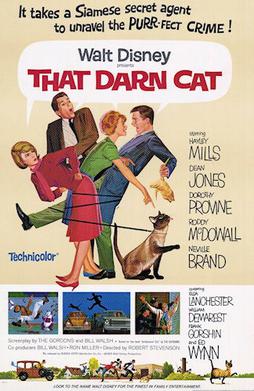 Dorothy Provine was an actress who was like no other. Even though her name is not as well known today, back when she was alive she had many roles that are well known. On April 25, 2010 she passed away with a great amount of roles. In That Darn Cat! she stars as the reluctant older sister involved in a police investigation into a kidnapping.

When Patti finds that her cat DC has a watch rather than a collar she is startled. Upon realizing this she turns the watch over to see that it says Help Me!. With a kidnapping in the area, Patti suspects that her cat came across the victim and convicts. Against her older sister’s, Ingrid, wishes, Patti brings DC to the police station with her story. When she arrives she meets inspector Zeke Kelso who is reluctant to take on the case. Yet, when he presents it to his superiors the case is on. Zeke goes over the Patti’s house and sets up the operation after a team of police officers are briefed on the situation at hand. However, when Patti’s boyfriend arrives he suspects that something is going on. Patti is advised by Zeke to not inform him of what is going on as it might compromise the situation at hand. When Ingrid returns home she is furious at what is happening within the house. But, Ingrid is forced to go along with the operation that is to take place. That evening Zeke and the police crew follow DC only to find themselves back in Patti and Ingrid’s house. After this it is viewed to be a wash and the police stop the investigation using DC. However, Patti still believes that DC did stumble upon the kidnapped woman. Trusting her instincts she contacts Zeke again. The two follow DC to the apartment where the kidnappers are staying. When the kidnappers realize who they are and after a bit of a struggle the kidnappers are arrested and the woman is freed. With DC being hailed as a hero everything goes back to normal with Patti and her boyfriend. But, Ingrid dumps her boyfriend, who was stuck up and needy, for Zeke. The movie closes with DC and his own family.

That Darn Cat! is quite the comedy. In every scene, there is something funny that is going on in the lives of those involved. In 1965, this movie premiered to make audiences laugh over and over again. Dorothy Provine portrayed Ingrid, the practical older sister who wanted nothing to do with a police investigation. On April 25, 2010 this actress who h