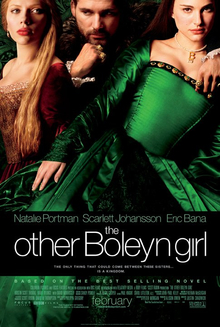 Many people have heard the name Anne Boleyn. The mother of Queen Elizabeth the 1st and the second wife of King Henry VIII. She was infamously accused of adultery and beheaded after being found guilty. On May 15, 1536 she was put on trial and condemned to death. In the 2008 film The Other Boleyn Girl we are introduced to a somewhat fictionalized version of Anne’s rise to power.

Mary Boleyn has just married her betrothed husband William when she meets King Henry VIII. Although, King Henry was supposed to take a liking to her sister Anne as a mistress, he chooses Mary instead. Slowly, Mary finds herself being forced into being the Kings mistress. With her father and uncle encouraging her for a power play, Mary goes further into a relationship with the King. However, the object of her sister comes into play when Mary learns that she has married without anyone’s knowledge through her brother. Upon hearing the of news Mary informs her family causing them to exile Anne to France.While Anne is in France, Mary’s husband dies and her affair with the King goes a step higher when Mary learns that she is pregnant. The King grants Mary’s family with lavish gifts of a new house and positions in the court. But not without the caution of Mary’s mother who tells her husband she is not pleased with what has happened to her children. Upon Anne’s return, King Henry VIII is quite taken with the younger Boleyn sister as Mary is confined to bed. Anne tells Mary that she is furious with her for causing her to be exiled. Anne goes out of her way to make the King hers causing the King to file for divorce. Once married to the King, Anne finds herself pregnant and gives birth to a daughter. Knowing her husband wants a son, Anne finds herself pregnant, but giving birth to a stillborn son. Anne attempts to convince her brother to give her a son. However, this does not happen, but is witnessed by her brother’s wife. Once the King hears this news, the trial proceedings for Anne and her brother are brought forth. Anne ends up being condemned to death, as does her brother. Mary attempts to save Anne’s life by writing to the King, but to no avail. With the Boleyn family named ruined in court, Mary leaves and lives the rest of her life out in the country with her new husband and children.

The Other Boleyn Girl gives us the details of how Anne had risen to power. For the time period, Anne was independent, bold, and strong. On May 15, 1539, Anne Boleyn was put on trial for: incest, adultery, and treason leading to a verdict of guilt. This trial was shown in the 2008 film The Other Boleyn Girl to show her downfall as the rest of her family.