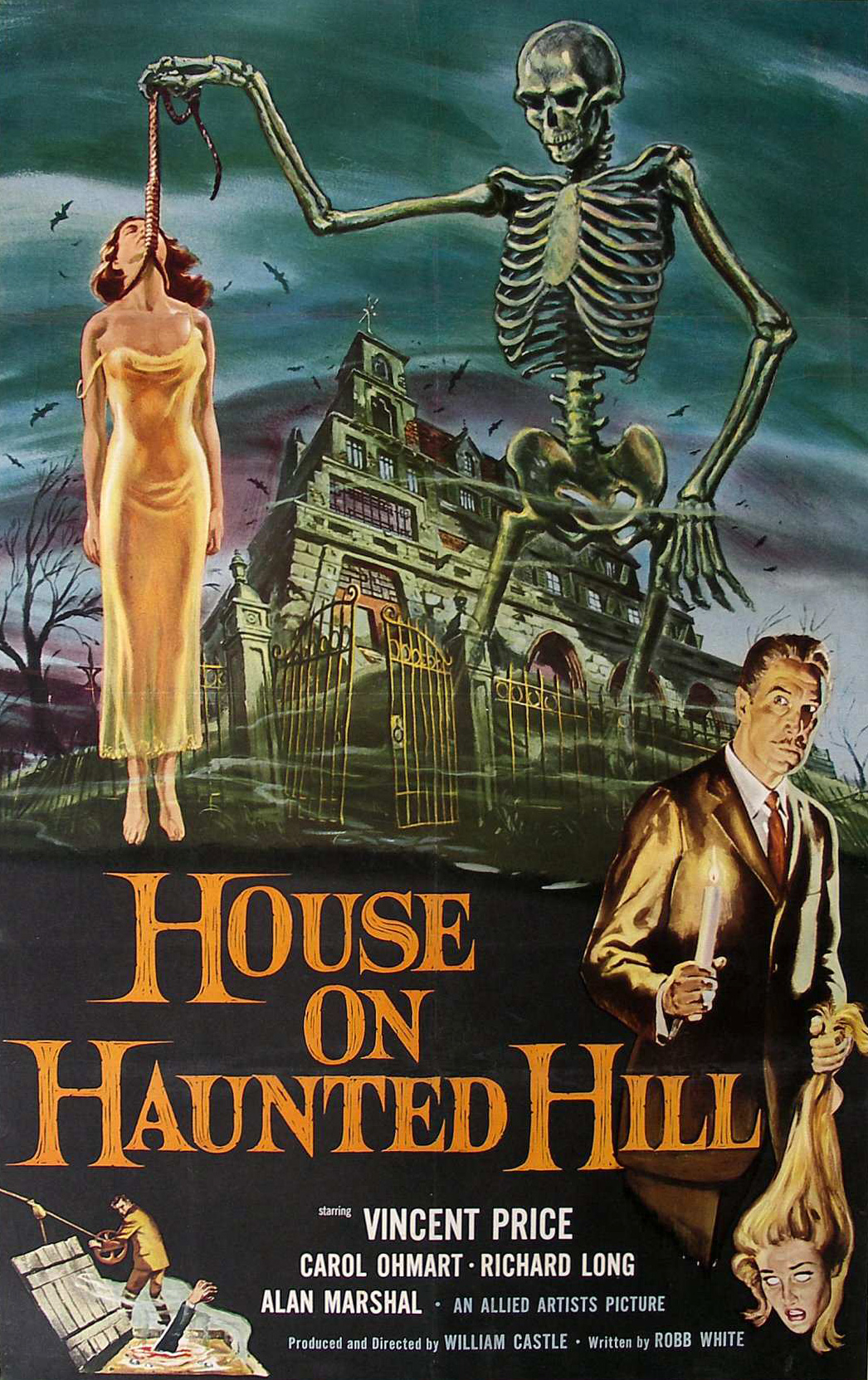 Vincent Price became known for his distinctive voice and performance in horror films. Many people who have starred in horror films have been inspired by him at least once. In these films he is able to keep a calm demeanor while setting the mood for the movie. On May 27, 1911, this legendary horror actor came into the world. In the 1959 movie, House on Haunted Hill his skills are again utilized in a fine performance.

When eccentric millionaire Frederick Loren decides to “throw a party” for his wife he decides to make it the best one yet. Bribing the guests with ten thousand dollars each, they learn that there really is no party, just a haunted house Loren wants them to investigate. Throughout the film, each of them are armed with a gun as each of them fall prey to a different ghost. One of them, Nora, becomes more and more convinced that there is a ghost that is trying to push her to a psychotic break. Eventually, it is discovered that there is a more sinister plot behind the haunting. When one of the guests discovered that someone faked their death more secrets start to become revealed. With the ghosts scaring and killing each of the guests, they learn that it is them against spirits who are trying to frighten them, as well as warn them. What is the secret that keeps these ghosts there?

Vincent Price had a very distinctive voice that was used through out many films, especially the horror genre. In House on Haunted Hill, he is able to bring to life an eccentric millionaire who wants to learn more about the property he is on. On May 27, this deceased and legendary actor would have turned one hundred and five. But, he lives on through redefining the horror genre with his methods.

Bram Stoker created one of the most iconic vampires of all time. Dracula has gone one to become one of the beloved, yet feared, villains. On May 26, 1897, this historic novel was published for the first time. As time went on, the book grew into a play. Eventually, in 1931 Dracula became a film starring the legendary horror movie actor Bela Lugosi.

When Renfield arrives in Transylvania to meet Count Dracula, he is immediately taken a back by the townspeople. Upon hearing that is where he is heading some are silent, some are praying, while others warn him of the danger that is there. Once Renfield arrives at the Counts castle he is shaken by the man who he is to visit. He watches him walk through spiderwebs even though he is welcoming. As expected, Renfield falls victim to Count Dracula when the vampire bites him in his sleep. Dracula takes advantage of the opportunity to travel back to England with Renfield. However, Renfield is deemed mad due to the Count hypnotizing him instead of turning him into a vampire. Once in England, Dracula makes the acquaintance of John Harker and his fiancee Mina. Instantly, taken in by Mina, he starts hunting her to make her his own. Luckily, for Mina, Dr. Van Helsing discover’s Draculas secret when he sees he has no reflection in the mirror and turns away at the symbol of a cross. Knowing that Renfield has fallen victim to Dracula, Van Helsing starts to smartly warn people of the Count’s actions. Only to have them be ignored, until Mina is attacked. Investigating more about the vampire, Van Helsing heads off to the sanitarium where Renfield is staying to learn his strengths and weaknesses. Against the better judgement of the hospital, Van Helsing lets Renfield go in order to understand Dracula’s hold on him. While this is going on Mina has fallen under the complete spell of Dracula. John learns of the villainous vampires just as Van Helsing comes back. The two work together to stop Dracula. Once Dracula is staked things start to go back to normal as the credits role.

In 1931, Bela Lugosi brought the vampire who has been parodied multiple times to life. Without Bram Stoker, there would be no Count Dracula to haunt us in our dreams. On May 26, 1897, this iconic vampire came to life on the pages of a book to haunt people for generations to come.