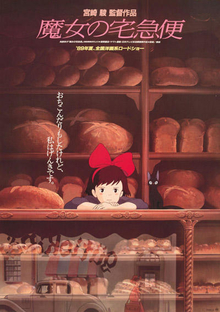 Phil Hartman was quite the comedian. This inspiring comedian passed away on Mary 28, 1998 in a murder homicide. Although, his life was cut short, he is still remembered for his talent. In the 1998 anime film Kiki’s Delivery Service he voiced the character of Jiji for the English version.

Kiki is a witch who heads off to the city to complete her training. After saying good-bye to her parents, she and her cat Jiji head off. Upon arriving in the city, she is astounded by the people around her. Many of them are in shock to see a witch, while others are amazed. She finds a place to stay with a baker, Osono. In order to pay for her room and board, Kiki delivers the baked goods. While doing this she makes a friend out of lonely artist Ursula. One day, Kiki finds that her magic is fading due to the stress of her delivery service. When she realizes that she could lose her magic powers forever she consults Ursula. When she hears the story about Ursula’s artist block, she decides to take a break from magic for a bit. All of that comes to an end when a boy, Tombo ends up in danger in the sky. Tombo has been an annoying boy who has a crush on Kiki. Finding the courage in herself, Kiki borrows a broom flying to Tomboy saving him from death.  When Kiki lands she is applauded for her bravery. Feeling confident, Kiki continues on with her training alongside Jiji and the new friends she has made.

Phil Hartman may not have been the original voice of Jiji in Kiki’s Delivery Service. But, his voice is heard loud and clear in the English dub. On May 28, 1998 the world lost a fantastic comedian in Phil Hartman when he passed away. He is still remembered today as an inspirational comedian who is still beloved by many.