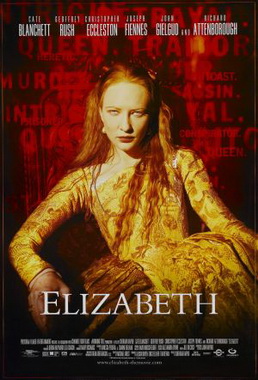 On September 9, 2015 marked Queen Elizabeth II as the longest reigning monarch in the United Kingdom. However, for a woman to rule in England as a Queen is something that has not always been easy. In the 1998 film Elizabeth, we are introduced to Queen Elizabeth I and her struggle for the throne.

The movie opens with Queen Mary, known today as Bloody Mary, dying. The Catholic queen who has gone to great lengths to kill Protestants knows that her only successor will be her Protestant sister Elizabeth. This is a fear to her and all Catholics around her as she wanted to keep England a Catholic nation.

After Mary dies Elizabeth is crowned, but there are a few problems. She finds herself dealing with her cousin Mary Queen of Scots who wants her thrown and to return England to state it was. She also has to deal with choosing between love and her duties. As the film goes on we watch as Elizabeth rises above to prove to the men of court that she is able to rule. When she survives an assassination attempt Elizabeth starts to accept her destiny as Queen of England. Although she will rule alone, she knows that she will be great. The movie closes with Elizabeth transforming into the Queen by cutting her hair and wearing white powder make-up. From there we are informed that Elizabeth’s reign was one filled with power and glory.

Both Elizabeth’s are strong with their rule. History shows that Elizabeth I of England was able to bring a country to greatness. Although this movie has been accused of anti-Catholicism, as a Catholic, I see these events are historically true to what was going on in Elizabeth’s lifetime as she was viewed as unworthy of the thrown. On September 9, 2015, Queen Elizabeth II became the longest ruling monarch in the United Kingdom. Elizabeth II is just as powerful as Elizabeth I.