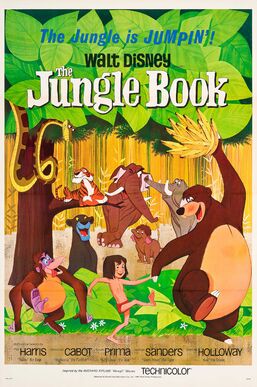 Bruce Reitherman brought many animated children characters to life. In 1967, he brought to life the character of Mowgli in Disney’s The Jungle Book. His voice characterization of Mowgli is like no other.

Mowgli is an orphaned boy who has been raised by a wolf pack. However, he learns that he has to leave when the man hating tiger Shere-Khan appears. Promising to hunt him down and kill anyone who is in his way, Mowgli and the panther Bagheera head off to the nearest man village for Mowgli to live. Yet, Bagheera wasn’t all to honest with Mowgli as the boy is unaware of the danger that he is in. When he does learn the truth, Mowgli runs off only to find a carefree bear by the name of Baloo. The two forge a friendship with Baloo promising to raise him. But, Bagheera shows up and informs Baloo of the danger Mowgli is in. After Mowgli is taken by orangutans and rescued, Baloo tells him that he must go to the man village by hurting his feelings. Upset at this news, Mowgli runs away from Baloo only to find himself in danger with the snake Kaa. Encountering Kaa earlier he knows his tricks, but falls into a deep sleep with Shere Khan nearby. At the same time, Bagheera and Baloo encounter elephants asking for their help. Unaware that Mowgli is close by and Shere Khan is eavesdropping, the hateful tiger learns of Mowgli’s whereabouts. Immediately, both parties set off to find the boy. In the meantime, Mowgli wakes up from his sleep when Shere Khan pulls Kaa out of a tree. Hearing the tiger is close by Mowgli leaves Kaa and finds four friendly vultures. Upon finding the four, Shere Khan appears scaring the four off. At the same time, Baloo appears and fights Shere Khan. The vultures and Bagheera appear, helping Mowgli by informing him that the tiger is scared of fire. At the same time, a thunderstorm brings lightning to strike a tree. By taking a falling tree branch that is on fire, he ties it to Shere Khan’s tail. The terrified tiger runs into the woods, it is implied that he dies in the fire. With Baloo and Bagheera by his side, Mowgli decides to stay in the man village. That is until he spots a young girl. Stunned by her beauty he leaves Bagheera and Baloo to go to the man village. The movie closes with Bagheera and Baloo heading off into the jungle together, while Mowgli starts a new life.

The Jungle Book would not have been the same if Bruce Reitherman did not portray Mowgli. On September 15, 1955, Bruce Reitherman was born making today his fifty-first birthday. As a child voice actor, Mowgli is one of the characters he brought to life.