This Easter was definitely a different one. Instead of having people over we had to call and/or Zoom instead. Celebrating Easter while on Quarantine was definitely dinner. The meal was smaller and quaint. I am enjoying watching Easter movies like Easter Parade and Here Comes Peter Cottontail.

But, nothing makes up for seeing people in person celebrating the resurrection of Jesus Christ. Many people call today Resurrection Sunday for that reason. There is much to be thankful for as I was reminded in the prayer my dad said before we ate. I hope you stay safe and well during this time.

The Nutcracker at The Garde

On December 10, 2016 one of the best well known Christmas shows came to The Garde Arts Center in New London, Connecticut, The Nutcracker. The show was put on by the one and only Eastern Connecticut Ballet. There was much excitement in the theater as there were Christmas trees in the lobby among colored and white lights strewn around green firs. The was the Ballet Boutique which sold Christmas ornaments of nutcrackers and characters, flip flops, sequenced crowns, clocks, and snow globes. Even the Humphrey Bogart statue was wearing a Santa Claus hat.

Before the patrons came in the ushers were abuzz with activity as the prepped for their roles the day, as well as the bartenders getting food and drinks ready. The box office employees were wearing reindeer antlers to welcome the patrons in.  There was the set up for the future Garde Arts Shows of Wally Lamb’s “I’ll Take You There” on December 18th as well as Quinn Sullivan coming on December 16th.  Including a DVD ballet performances from The Stars of the American Ballet was being set up as patrons filled the box office lobby.

As soon as they were allowed inside the patrons rushed over to the Ballet Boutique awed at what they saw before them. Several little girls dressed in sparkly dresses wore the sparkly tiaras that were sold in pink, purple, and white. Others admired the small nutcrackers they had in the forms of Christmas ornaments among the ballerinas. Many of them ran to the Christmas trees to go take pictures in front of them to share. Several audience members were carrying in bouquets of flowers with lilies, daisies, and red and white roses for the dancers.

Yet, the one part of all the décor that brought the patrons in were the AD HOC Carolers. Eight people sang songs like Carol of the Bells and Hark! The Herald Angels Sing. Many audience members joined in the singing of these treasured Christmas Carols. Then the doors opened with ushers guiding patrons to their seats. Inside the theater members of the orchestra were taking their seats as they prepped for the beginning of the show. With the balcony beginning to fill up, the carolers made their way inside the theater to entertain patrons. Encouraging the audience to sing along to Jingle Bells and Santa Claus is Coming to Town time flew by. Many of the children enjoyed singing Rudolph the Red-Nose Reindeer where they had cut out the words reindeer and nose and using hand signals with the orchestra joining in.

Before I knew it the lights had dimmed welcoming the conductor into the theater. As he started the curtain rose with the tale of The Nutcracker coming to life. Starting off with the classic telling of a Christmas Eve party where a little girl named Clara receives a special nutcracker from her magical uncle, Herr Drosselmeier. Sadly her enjoyment is quickly destroyed as her jealous brother Fritz breaks the nutcracker. Clara tends to the nutcracker as the night dies down, however she falls asleep to find herself on a magical journey to a far off land. There were laughs at the little mice that scurried across the stage and sighs of awe when the Christmas tree turned into a boat. In this rendition of The Nutcracker there was no mouse king, instead Clara won the heart of the Prince in a sea battle against a band of pirates.

Upon Clara’s arrival there was a dance with the Snow King and Snow Queen which was met with applause as the curtain fell for intermission. A little girl dressed as an angel to present them with flowers as the lights came back on. There were many patrons discussing the liveliness of the show that they were in awe of. Many more brought souvenirs from the Ballet Boutique to remember the special show they had seen. With the second act starting the orchestra started to play as the lights dimmed.

When the second act started there was applause as each different type of dancer representing parts of the world. Yet, the one that got the most laughs came from Mother Ginger as she made her grand entrance followed by the children coming out from her gigantic skirt. The magic of the flowers dancing with the Dew Drop Fairy that followed the Arabian and Spanish dancers brought everything to lfie. Then the grand finale dance with the Sugar Plum Fairy and her Cavalier. Many of the audience members cheered on as they watched in awe of her dancing. When the curtain call came there were many people standing and cheering for all of the dancers as they took their bow. Two little girls dressed as angels presented the Sugar Plum Fairy and the Dew Drop Fairy flowers.

When the show ended there were many patrons discussing the magic that they had witnessed. Many patrons who knew dancers waited patiently to give them their bouquets of flowers. Others visited the Ballet Boutique to give pick up one final souvenir before they left for home. Several wanted to take a final photo before the Christmas trees. With another fantastic and magical performance of The Nutcracker from The Eastern Connecticut Ballet in the books, it was one Christmas tradition that will continue to live on at The Garde Arts Center. I hope everyone out their has a wonderful Memorial Day. Although today many people are celebrating the day off with cook outs, going to the beach, and other fun activities, I hope you remember why we have today off. There are many men and women who have given their lives for the United States of America so we can live in a free country. National Siblings Day! I hope to all who have siblings were able to enjoy their day and appreciate the special bond siblings have. 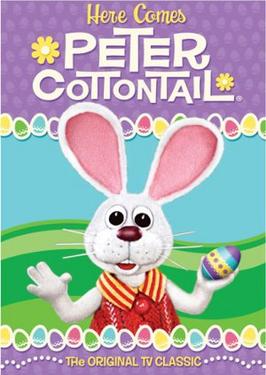 You didn’t think I would forget about the Easter Bunny? In the 1971 Rankin Bass Easter special, we are told a story about how the Easter Bunny came to be. Peter Cottontail is all set in line to become the Easter Bunny. Unfortunately, his one chance ends up being sabotaged by a vengeful rabbit.

We are introduced to Peter Cottontail by Seymour S. Sassafrass. He tells us the story of how all of this came to be. Early on we learn that Peter Cottontail is the son of the Head Easter Bunny, Colonel Wellington B. Bunny. When Peter is told that he would be taking on the responsibility of the Easter Bunny soon, he tells a lie and his ears flop down ( a sign that he is lying). Just when everything is set to be put in motion for Peter to assume his role of the Easter Bunny, Irontail steps in reminding Wellington of the law. Irontail is a vengeful rabbit who wants to ruin Easter all around. His tail was stepped on by a child once causing him to have to wear iron on. On the eve of Easter Sunday, Peter spends a night out with friends. He sets his alarm clock, who is a bird atop a clock, for the next morning. However, Irontail comes and puts bubble gum in the birds mouth causing the bird to croak. Peter sleeps all the way through Easter Sunday giving Irontail the advantage. Irontail doesn’t do to well, however according to the law the one who can give out the most Easter eggs on Easter wins. Irontail is able to give out just one egg making him the winner. When Peter wakes up he is unable to catch up to Irontail by the time Easter Sunday is over. With Irontail the winner he informs everyone of the changes that will happen to the beloved holiday. Peter leaves Easter Valley in disgrace because of what has happened. Along the way he runs into Seymour S. Sassafrass. Sassafrass understands Peter’s situation and lets him use his time machine. With the help of a caterpillar named Antoine, things start to go smoothly. However, Irontail gets wind of this plan and sabotages the machine. As Peter and Antoine go through several different holidays, Peter learns the importance of responsibility and being truthful. As all of this is going on, Peter starts to give out eggs only to have them stolen by Irontail. While in Christmas, he is just about to give out the eggs to a store owner in exchange for a talking Easter bonnet. This time, Irontail gets the eggs and Peter accidentally leaves behind Antoine. Landing in Valentines Day, Irontail casts a spell on the eggs making them turn green. Luckily, the next holiday is St. Patricks Day and everyone wants an egg. After all of this happens, Easter is restored to the happy holiday it once was before Irontail had turned Easter bonnets into galoshes and colorful eggs in mud colored eggs. The musical ends with Peter giving out eggs and Irontail working as a janitor.

Upon this day Christ has Risen from the dead. Proving that He is the Son of God on this day He proved his might. When they went to the tomb, a stone had been moved showing His might. Jesus rose and showed the world His love once again. Happy Easter to all! I hope you remember why we have a day to celebrate! When Jesus had received the sour wine, he said, “It is finished,” and he bowed his head and gave up his spirit.- John 19:30 Yesterday was another holiday Purim. To all who are Jewish I hope you had a wonderful holiday.

Happy St. Joseph’s Day everyone! I hope you all had a great day!