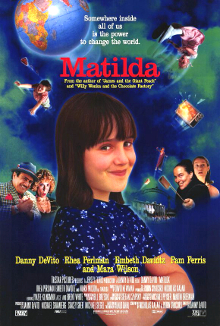 Raold Dahl was an author that was influential in my childhood. Many of his books have been read several times over and over again by children and adults all over the world. The first book by him that I enjoyed became a movie in 1996. Matilda is still a favorite movie of mine as a young girl with a brilliant mind and fantastic powers changes the lives of those around her.

From birth Matilda Wormwood has been misunderstood by her television addicted family. Each day, her dad goes to work as a crooked car salesman, her brother goes to school, and her mother goes out trying to win it big at BINGO. So, Matilda starts to take care of herself, each morning she makes herself breakfast and goes to the library. After reading all of the books there she manages to convince her father to let her go to school. But, her first day at school she discovers that the principal is a tyrant. Yet, she learns that her teacher, Ms. Honey, is kind and caring woman. While making those who make her life hard around her by punishing them using her powers, she discovers that Ms. Honey is the principals stepdaughter. After her father tragically died, she was told it was a suicide, but she believes that Trunchbull, the principal, was in on killing him. Trunchbull took everything from Ms. Honey by forging the will her father left her. Matilda knows that she has to take down the principal in order to make everything right again. But, she has to help her father out because the FBI is staking out her father’s car dealership because of his crooked ways. Not all is hope is lost, as Matilda uses her powers to take down the Trunchbull by scaring her using her powers to imitate the ghost of Ms. Honey’s father. With her gone, Matilda starts to spend her time with Ms. Honey. But, when her father is caught by the FBI her family is heading off to Guam. She manages to convince them to let her stay with Ms. Honey as she loves it where she is. They do so, and Matilda and Ms. Honey live happily ever after with the family they always wanted.

Matilda came to delight audiences in theaters in 1996. However, nothing compares to the original book that was written by Raold Dahl. On September 13, 1916, Raold Dahl was born. On this day he would have celebrated his 100th birthday, but he has passed on since. Even though he is gone his work lives on entertaining many people in the past, present, and future.

One thought on “Matilda”